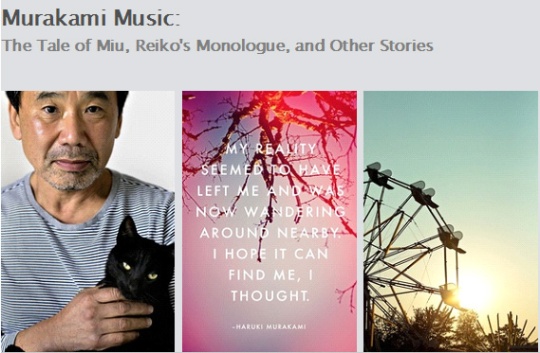 In a captivating performance on Wednesday night, Eunbi Kim and Laura Yumi Snell crafted a new kind of performance art, a new kind of presentation format for live classical music and a new message for contemporary performing artists. With the spell-binding production of Murakami Music, Eunbi and Laura made it clear that if you are willing to take big risks– your art will thrive.

It’s taken me several days to begin to write this review (for lack of a better term) of their performance. I’ve been thinking about the experience, what I took away from it, and how in the world I would try to explain it to you. I knew that a simple recap would never do it justice. This post is going to be much more detailed than other reviews I’ve done; for when I get the opportunity to write about something that absolutely embodies the core ideals of Tuxedo Revolt, I have to be able to share it with all of you.

When Eunbi first told me about her idea for Murakami Music, I featured the concept in a post back in January. If you aren’t familiar with this project or need a refresher– click here. Last week’s performance took place at The Cell Theatre in Chelsea. It was the perfect venue, living up to its definition as a 21st Century Salon. I must give a great deal of credit to the founding artistic director of the Cell Theater, Nancy Manocherian for her vision for such an innovative, elegant and multi-functional performance space. For a hybrid music/drama project like Murakami Music, the Cell provided a fresh and blank canvas for Laura and Eunbi to explore throughout their performance. But now— onto the performance itself.

Merely listing the order of events, pieces played, and highlights of the evening isn’t appropriate. I found Murakami Music to be so intellectually stimulating that I realized I would need to analyze the performance like a painting, or a piece of literature. This was no concert– it was a full-out experience.

When you consider that the project was based on passages of Murakami’s writings, combined with a performance of musical selections referenced in his novels, a book reading with musical examples is the first thing that comes to mind.  The project’s director Kira Simring anticipated this perception and skillfully transcended it. As the program began, artist LauraYumi Snell read from a copy of Murakami’s book– as we might have expected. Then, as Laura continued to recite passages from the novel, Eunbi began to delicately introduce the solo piano into our field of perception. Laura continued to read aloud, but gently closed the book, all the while still reciting Murakami’s text. The dramatic narrative from the text then took on a life of its own. With flawless transition, our descent into the world of Murakami Music had begun.

This performance was focused on engaging the audience at all times. Murakami’s texts, so skillfully dramatized by both Laura and Eunbi, shared a symbiotic relationship with the music of Chopin, Debussy, Prokofiev and other composers whose music was featured in the performance. Spoken word and live music gave meaning and context to each other. Audience members who had never read the works of Murakami were introduced to his world of dual meaning and pensive emotion through beautiful music with similar dramatic properties. Audience members who were not familiar with solo piano music were introduced to it in way that they could begin to understand its emotional depth as it echoed the emotions of the unfolding drama.

For the music-must-stand-alone-as-its-own-art-form critics who are reading this, I must say that Eunbi and Laura created a performance where both music and drama took equal roles. The music, brilliantly executed by both Eunbi and Laura, was in no way impeded by the precisely planned and well chosen texts they also presented. Under the gifted guidance of Kira Simring, the pair used both music and drama to appeal to the senses of sound, sight, and spatial awareness. As an audience member, I was on edge waiting for what was to come next.

Transitions between scenes and musical selections were handled flawlessly and the performance never lost its momentum. I am most critical of transitions between events when I attend performances. These are the moments when audience members are not lost in their own thoughts, but rather present with you and in the moment. Transitions present a golden opportunity to introduce new themes, new ideas and new energy. Too often, transitions seem like TV commercial breaks, interrupting the flow of a performance and flat-lining the energy of the overall experience.

Murakami Music reminded me of why the tradition to hold applause until the end of a performance came to be in be first place. Once upon a time, musical performances were so captivating to audiences that no one dared to release the energy or flow of a performance until the event was truly finished. Audiences didn’t know what to expect as the next great work began to unfold. Finally, at the end of the performance, the moment came for the audience to express appreciation for the performers and to release through applause the energy that was building within each audience member throughout the performance.

As the final tableau in Murakami Music drew to a close, I glanced around at my fellow audience members. I saw young and old on the edge of their seats, leaning forward, captivated and ready it burst into applause. When the final note of  Prokofiev’s Sonata No. 2 in d minor, op. 14 sounded, we the audience, finally had our moment to thank the artists who performed for us. It was truly a genuine exchange of gratitude.

When I am able to attend such a great performance, I am inspired to keep writing this blog. I am refreshed and reassured that through adaptation and innovation, live performing arts can still be socially relevant and meaningful to audiences. With its solo piano and stage absent of scenery and props, Murakami Music brought to my mind images from the great American playwright Thornton Wilder‘s Our Town. When the audience is challenged to use its imagination, but is guided to do so, there is a freshness to the performance and each audience member walks away with a unique and memorable experience.

I’m reminded of a line from Our Town spoken by the character Emily Webb, “Live people don’t understand, do they? They’re sort of shut up in little boxes, aren’t they?”

In Murakami Music the audience shared in an emotional journey together. We heard live music and spoken words. We saw expression on the faces of the performers which led to an expansion of our own sense of empathy. And for just a little while, we weren’t shut up in the little boxes of ourselves. As an audience we shared in the experience together, and it became ours.

Congratulations to Eunbi Kim, Laura Yumi Snell, Kira Simring and the Cell Theatre for a performance that was truly in the in the spirit of Tuxedo Revolt. 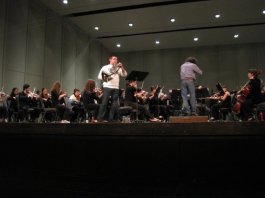 Thanks for stopping by the Tuxedo Revolt website and blog.  For those of you who have been following me and the previous models of this site/blog I should start by thanking you for your loyalty. My online home has undergone plenty of revisions since the initial domain name several years ago.  Over the course of the past several years, I experienced a personal and professional metamorphosis that transformed who I am as musician and artist.  It reshaped and enriched my thoughts and convictions about performing.

I left Kentucky to start a life of music in New York City, I finished my Master’s at Manhattan School of Music in 2011. I freelance with various professional orchestras in the New York City Metro area; worked in th

e Director of Education of a professional orchestra in NYC; taught music lessons to underprivileged children in inner city Harlem; and I also work in higher education in the music library of The New School University in Manhattan. All of these things have shaped my perceptions of the performing arts climate worldwide and how we all fit into it.

If you have been following me over the years, you will realize that my online presence has shifted from being centered solely around just one of my life’s passions—playing the horn and classical music—to changing the way that people perceive classical music so that it becomes relevant to their everyday life.  Sounds like a lofty-artsy-fartsy goal right?

To be more specific, I believe that similar to the turn of the last century, the entire world is undergoing massive changes in

politics, economy and culture(s). The performing arts are in no way insulated against them.  How do we as artists adapt? How do we evolve? How do we craft performances to which everyone can relate? How do we connect with our audiences and invite them into our creative process? How do we connect children and young adults to classical music in a way that real and meaningful to them?

Whether you are a performing artist or an arts aficionado, I hope that you will find answers to these questions and draw inspiration from the Tuxedo Revolt. I want to prove that the days of walking onto

a stage in a black and white tuxedo and giving a performance that is both irrelevant and isolated are numbered– no matter how technically perfect the performance is.

Don’t be misled– my message is not negative. In this blog I will explore creative opportunities for performers  and music educators that will help to identify practical resources. By stimulating ima

ginations and examining the culture and identity of performing arts around the world we (the collective of performers worldwide) can respond appropriately and adapt to this changing landscape.

So as you can see, this blog and website has become about us as whole and not so much about me as an individual. Yet, I hope to lead by example—by presenting exciting, original, and innovative performances and I will document my projects on the blog.

I will seek out and profile other performers who are doing highly original work and who are helping breakdown old models in favor of newer innovative ones.  There is wealth of new discovery waiting to be explored in the world of performing arts.

I want your input as well. If you have a creative idea for innovative performance, please reach out to me on the contact page; I may feature your idea on the site.  Thanks again for stopping by—I hope you’ll join in the conversation.